The Legend! – The secret to a long and happy life?

You may have noticed I didn’t post a Tuesday’s Change last week. It wasn’t intentional. I was otherwise engaged. Sometimes family comes before all else and sadly I had to return home for a funeral. 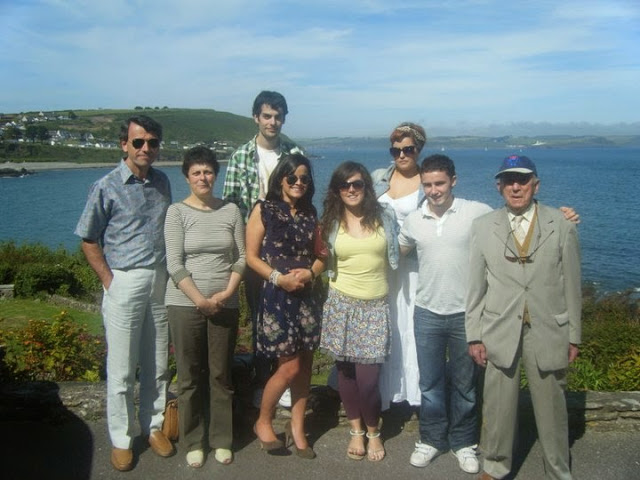 You see my beloved Grandfather passed away at the ripe old age of 90 years, 3 months and 2 days. He lived a long and happy life and was described by all as an absolute ‘Legend’. Up until he was about 85 he was almost as healthy as when he was 25. It was only in the last few years he began to slow down. Still he was so sharp and with it only selectively deciding when to hear you and when to not! 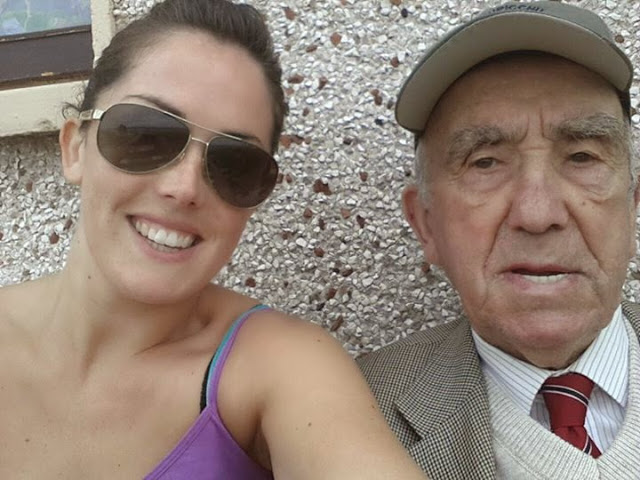 Teaching him how to take selfies!

He was an amazing man and respected by all who knew him. He taught us many things and if you could bottle his attitude and sell it you would be happy, wealthy and healthy! 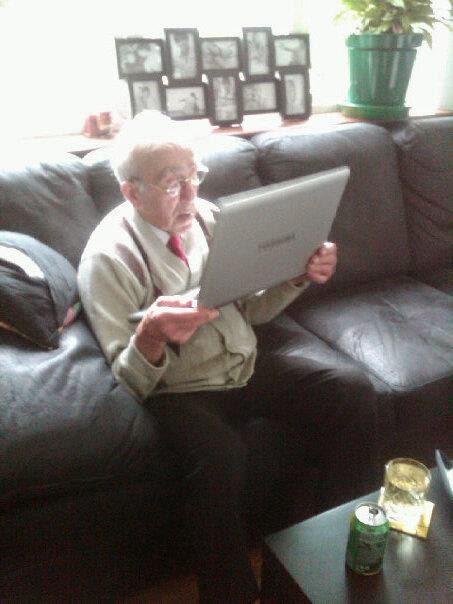 Reading the laptop like a book! We used to pull up history information for him on Wikipedia!

So what do I think was the secret to his long and healthy life? It’s actually quite simple really and it’s the basis for all I try to do in my life and this blog.

Eat Clean – he rarely ate processed foods, loved his balanced meals of meat and vegetables. He had treats and snacks but never over indulged himself. He cooked for himself right up until his last few years and never took the lazy approach to food. He always ate fresh, whole, real foods, nothing refined or processed.

Train Dirty – he never sat still and when he did it was only in his last few years. He used to walk everywhere and cycle great distances to see my Grandmother when they were first courting. He famously once walked 6 miles in his late 70s instead of waiting for the bus! He was always doing odd jobs around the house or in the garage and rarely sat down to watch TV. He kept his mind and body active. He was lean and strong for most of his life until about 80 when gravity started to take it’s toll.

Live Easy – he really never got stressed, upset or worried about anything. He never rushed anywhere, much to the displeasure of my Grandmother and he always had time for everyone. He took everything in his stride and if he couldn’t fix or change something he didn’t stress about it. He appreciated the little things and enjoyed life’s simple pleasures. At 75 years old after losing my Grandmother he decided to head off on his own and do a bus tour of Europe! His zest for life was truly amazing. 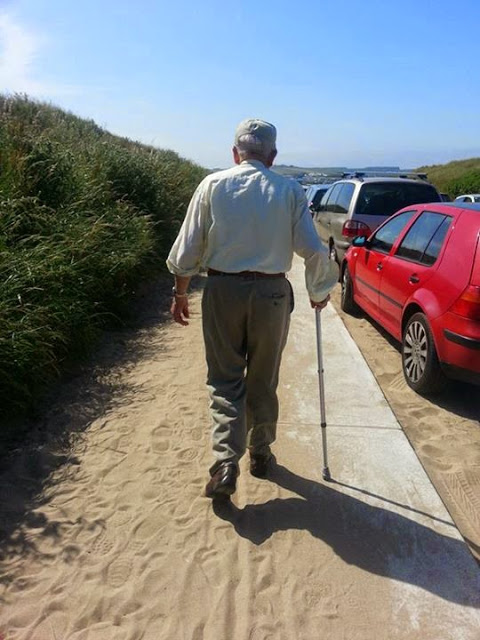 A few years ago myself and my sister were in the hospital with him. The doctors asked what medication he was on, they didn’t believe us when we said none! Most 50 year olds now are on at least some form of prescription medication but in his 80s he had a clean bill of health.

My sister summed him up much better than I can and I’ve included her eulogy below.

This post is a tribute to him and all his wonderful ways. I think my fondest and most recent memory of him was at my wedding last year. He loved having a big crowd of his family and friends around him and showing off his grandchildren for all to see. My husband was just about to deliver his speech to me, I was nervous and excited and was ‘patiently’ standing there waiting to hear what he would say. At that moment Grandad tugged at my dress and called me. I turned around to him thinking something was wrong as why else would he call me at such a pinnacle moment in my life? There he was sitting on his chair in front of all our guests, beaming from ear to ear with a cheeky grin on his face. I leant down close to him asking was everything ok and he said ‘Jean, I’ve never met so many girls!’ Inappropriate timing but he was a charmer since the day he was born, no one could be cross at him! He was in his element with all my girlfriends chatting and dancing with him! He was certainly the most eligible bachelor there! 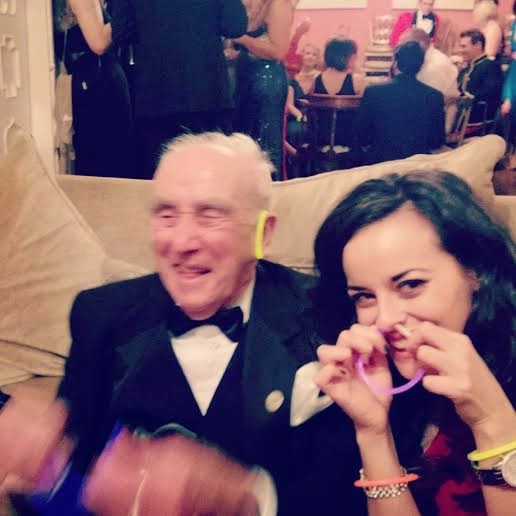 He also loved the glosticks we had for the party afterwards. Perhaps the only 89 year old in a three piece suit and dickiebow who can rock a good glostick!

Eulogy delivered at his funeral by my sister Kate:

Firstly, on behalf of all our family, we’d like to welcome you all here today and thank you for coming. To the doctors, nurses and all the staff of St. Oliver’s ward in St. Finbarr’s hospital we extend our gratitude for their exceptional, attentive care during Grandad’s final weeks. They made his time there comfortable and pleasant and we can not speak highly enough of them!

Where does one begin to summarise the varied and wonderful life of a 90 year old? I personally was lucky enough to have known him for just over one third of those 9 decades. During his lifetime he was known by a number of aliases:

John
Jack
Mr. Lynch
Grandad
and G-Dad as he was affectionally christened by us, suggesting this was his gangster name! 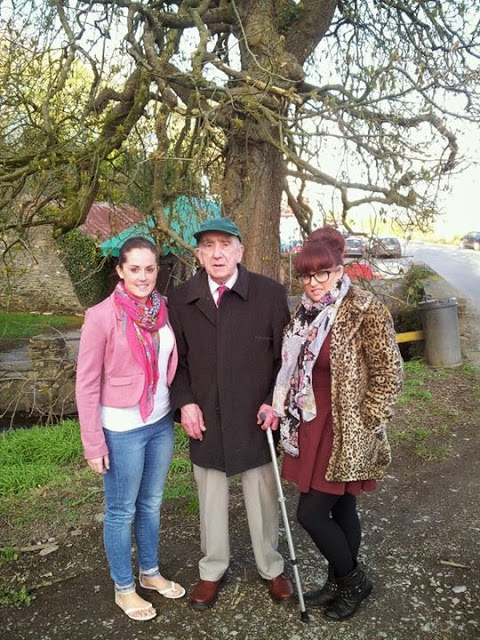 Regardless of what you called him (as long as it wasn’t early in the morning!) he would have you stopped and engaged in conversation long before you even recognised him. Mum and Granny often complained it took ages to get anywhere as he liked to stop and chat to every Tom, Dick and Harry on the street, insisting he knew everyone, whether they recognised him or not. He famously once stopped mid way across a zebra crossing in the centre of Douglas to chat to a lady friend while cars backed up on the road ‘patiently’ waiting for him to finish his conversation!

He was a stereotypical Grandad – a Disney Grandad of sorts. If Calsburg were recruiting Grandads he would be the first they would call! With such a compact family, we as grandchildren never had to fight for his attention or affection. He gave his time willingly and patiently, attending ballet recitals, music performances, gymnastic displays and drama productions. I’m sure he was silently relieved to have 2 grandsons after 3 consecutive granddaughters. He got to swap girly concerts for the sidelines of matches and discussing tactics, league tables and game results. Whatever the event or occasion you could be certain a Examiner photographer was to hand, pressurised into capturing us and then blackmailed into printing us in the next day’s paper. He would then spend each day thrawling the pages looking for us, tracking down said image, having it blown up, printed, framed and hung on the wall. He gave his time willingly, played with us, built things for us, took us on adventures and spoiled us rotten. When buying us sweets in the shop and we couldn’t decide which ones to get, he was the only adult who would tell us to get both. 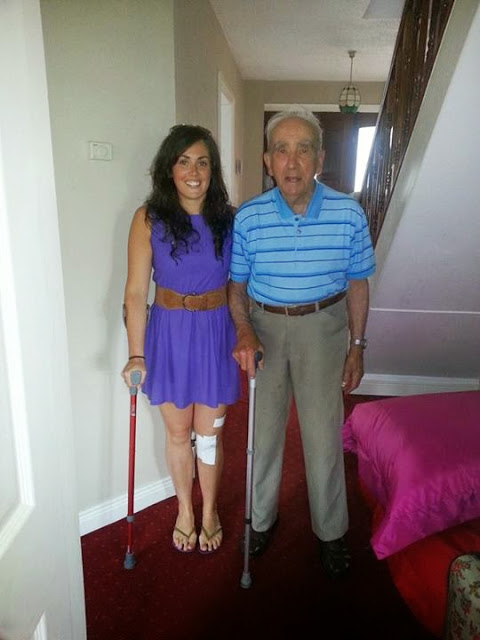 Comparing walking sticks. Mine after my knee surgery!

He liked to indulge, not just other people but also himself. He had such a healthy appetite for life and never hesitated to try new things. He took up long distance travel in his 70s and even developed a taste for Indian food in his 80s. He was always up for anything, never rushed anywhere and had such a positive outlook on life. This manifested in a clean bill of health for most of his life… perhaps helped by the 2 drops of Beamish 3 times a week. Drink is often associated with Grandad. His loved his Jameson, novelty drinks brought back from holidays, wine, champagne, prosecco and he even once tried absinth! Guinness from Nigeria was the only thing he wouldn’t drink. However, he practised impeccable self control and never over indulged. I never once saw him drunk. As a matter of fact I never saw him angry, frustrated, stressed or upset. If we could only bottle his mind set we’d probably have the cure for most modern illnesses.

He was a true Gent, a dapper dresser and the ultimate charmer. Words mentioned frequently about him were Legend and Character. He was a total ladies man and charmer and even at his weakest in hospital he still managed to flirt a little with the female staff and ball hop with the lads. An enthusiastic dancer he liked to believe Jean and Emma inherited that from him. A keen woodworker and fixer of all things he was always in the garage tinkering with something. Our houses are still full of his knick knacks and projects he worked on.

He excepted everyone and moved with the times. I never heard him speak ill of anyone and he loved nothing more than to be of help. You had to be careful not to mention you had broken down, lost something or needed anything as before you knew it he was trying to buy you a new car, fix what had broken or replace it with a new one. Tirelessly generous he was forever clumsily shoving notes into our hand for every school trip, holiday birthday or occasion.

He was a teller of the most terrible jokes with punchlines that left you hanging for what seemed like forever. Almost everyone here today has fallen victim to his Riverdance joke, not once but multiple times! 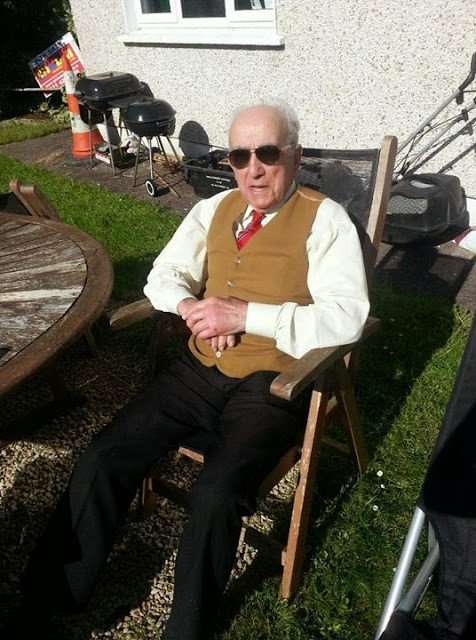 This was his idea of casual wear!

It’s very hard to be sad for a life lived so well. We can only be sad for ourselves that we no longer get to have such a legend and character in our lives. 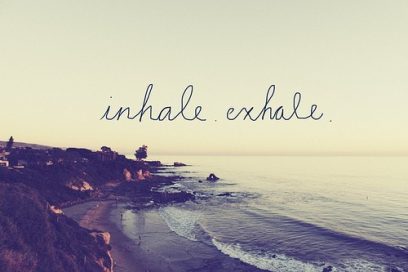 You can always control what goes on inside

This week's change has so many benefits I don't even know where to begin! It…

We use cookies to ensure that we give you the best experience on our website. If you continue to use this site we will assume that you are happy with it.OkPrivacy policy